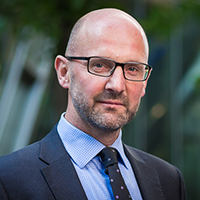 Myles White
Head of European Retail
Nuveen Real Estate
Myles has been involved in retail real estate for over 25 years.  As Fund Director, Myles provides strategic advice and direct the Fund team on major decisions. Myles joined the company in 1997 and was initially involved in repositioning the retail portfolio from secondary to prime assets.  He was part of the team which developed Bullring in Birmingham, UK. Myles has been responsible for setting up the UK Shopping Centre Fund in 2004.  He advised Future Fund on their investment into Bullring, Birmingham from 2009 to 2013, and the partnership of Canada Pension Plan Investment Board and APG Asset Management on their investment into Westfield Stratford City in 2010.  In 2013, he advised AustralianSuper on their investment into centre:mk as part of a UK retail investment mandate. Myles is a members of both the Royal Institution of Chartered Surveyors and the British Council of Shopping Centres.  He also has a BSc degree in Urban Estate from Liverpool Polytechnic.
View all Speakers